In this post, I'll cover how to build a crude, simple but working news aggregator in about 100 lines of python (source code). While a complete news aggregator will comprise of at least three steps:
in this article, we will focus on the second step only, aggregation of similar articles. 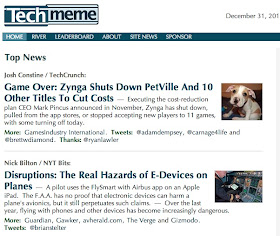 Let us state the goal explicitly: given multiple sources of documents, such as RSS news feeds, cluster together similar documents that cover the same material. For instance, both Reuters and Associated Press might cover Hillary Clinton's admission to hospital (which was a major story at time of writing). In the google news screen shot below we can see that USA Today, Detroit Free Press, Boston Herald and at least 10 other news organizations covered that story. We wish to recognize that these are the same underlying story and cluster or aggregate them. 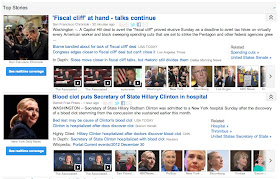 My approach was the following:
I'm not claiming this is an optimal scheme or will necessarily scale well and I did not focus on vectorized operations. It does, however, produce non-embarassing results in 100 lines of code. Later, we will discuss other approaches including the algorithm versus human debate.

Let's build an aggregator. To start, we will need some data sources. I chose a handful of RSS feeds about technology and IT news:

(We can assume that these source have already mostly accomplished the first news aggregator step: filtering.)

Next, we need to parse out the source. I decided to use the document title and description which is a shortish summary. I used the feedparser python library and the natural language processing library NLTK. For each document, I concatenate the title and description, convert to lowercase, and remove one character words. I store those final documents in a corpus and also store the titles to make the final results more interpretable:

Here is a sample of those data (titles only):

We will extract keywords using TF-IDF. I modified the following from this post:

I only want to extract a few top keywords from each document and I'll store the set of those keywords, across all documents, in key_word_list:

Here is a sample of those data:

Now that we have this superset of keywords, we need to go through each document again and compute TF-IDF for each term. Thus, this will be likely be a sparse vector as most of the entries will be zero.

for document in corpus:
vec=[]
[vec.append(tfidf(word, document, corpus) if word in document else 0) for word in key_word_list]
feature_vectors.append(vec)

With a vector of TF-IDF for each document, we can compare the similarity with each other. I decided to use cosine similarity (and yes, this matrix is symmetric and thus the code is far from optimized):

We now have a single similarity number for each pair of documents.

The next step is clustering. Initially, the most obvious might be to use k-means or k-means++ clustering. It is simple, well-known and can work relatively well. As well as getting stuck on local optima, the major problem here, however, is that one has to choose k. This is not always easy. Moreover, I strongly suspect that the characteristics of news changes dramatically. That is, on presidential election day, almost all top stories will be about voting and speculation on the results. That is, there may be very few, very large clusters. On slow news days that story landscape may be very different. As such, I think it would be difficult to choose a constant k across days and the characteristics of the data may change so much that a scheme to choose k dynamically might be tricky.

I chose a different approach: agglomerative or hierarchical clustering. Here clusters are grown by fusing neighboring documents to form a tree. The structure of that tree may change radically among different days but we can choose a similarity threshold to prune the tree to a set of final clusters. That similarity metric can be constant over days.

I used the hcluster python library and saved the dendrogram to file: 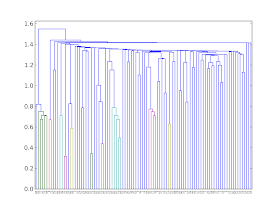 Finally, we need to chose a threshold from which to prune -- how similar is similar enough. 0.8 worked best for my data. There is then a little work to extract the clustered items from the dendrogram and print out the IDs and titles of the final clusters.

Here then, in combination with the dendrogram above, are my final results:

The complete output is here.

To sort the items within a cluster, the final news aggragator step, one could sort by PageRank using code such as this.

We see good cluster around Huawei, Person, Kim Dotcom, Facebook/Snapchat, Tim Cook, and Netflix. All of those seem reasonable. The next is spurious. Next is a broader cluster around smartphones. The next is a good four story cluster around the HP and Autonomy scandal. The next cluster relates to broadband and the documents are related but not really about the same material. Finally, there is a cluster around "millions" which cover both dollars and square foot.

The results are not great. I'm not going to build a techmeme.com competitor from this. However, they are surprisingly respectable for a first pass and for so few lines of code.

To try to improve results, I tried doing a weighted TF-IDF. That is, I suspect that words in the title are relatively more important than those in the description. Thus, I set a weight 1 for each word in the description and weight title_wt > 1 for each word in the title. When we compute term frequency I sum the weights for the words present rather than counts. The code for this change is here.

I did not find that this improved results. The dominant parameter by far was the number of keywords from each document (nkeywords=4 above). Increasing this dramatically increases false positives (i.e. larger mixed clusters, such as the million cluster above). Reducing it below 4 led to very few clusters (for a given document similarity threshold). Actually, I was surprised that the optimal value of 4 was so low. I had expected a larger number would have been needed to disambiguate different the articles.

A potential improvement that I have not tried is stemming the words. In the sample keyword output above you might have noticed the following:

Drones and drone are the same noun. Had I stemmed these it would have increased the TF-IDF of drone and created a space for an additional keyword.

I may be able to tweak my current code and improve results. I could try different parameters, try different similarity metrics, different clustering schemes but it is not clear how good the results could be. Could I match a human curator? According to Gabe Rivera, the founder of Techmeme.com, algorithms are not currently a match for humans. His site employs a small team of editors [http://techmeme.com/about] to curate the top news:

Our experience leads us to believe that a thoughtful combination of both algorithmic and human editing offers the best means for curating in a space as broad as technology.

I somehow started thinking about news aggregators just a few days before prismatic got a large round of funding. In the days that followed there was some debate about algorithms versus humans. Here is Techcrunch:

News aggregation is a glory-less pursuit, where even the companies that do succeed have to grapple with the fact that no algorithm is ever going to be as good as the human brain at judging what news/content will appeal to said brain

And Gabe Rivera (from Techmeme.com):

"A lot of people who think they can go all the way with the automated approach fail to realize a news story has become obsolete," said Rivera, explaining that an article can be quickly superseded even if it receives a million links or tweets. from gigaom

Some decisions, after all, are best left to humans.  When a news story breaks, for example, or a much-hyped product launches, a wealth of news coverage follows.  Which is the best version?  While Techmeme’s algorithms often derive this answer from “signals” on the Internet, sometimes surfacing the right story for the audience — perhaps the most comprehensive take or the most nuanced coverage — requires human intervention. outbrain.com

and finally in 2008, at the time Rivera introduced human editors

I should note that the experience of introducing direct editing has been a revelation even for us, despite the fact that we planned it. Interacting directly with an automated news engine makes it clear that the human+algorithm combo can curate news far more effectively that the individual human or algorithmic parts. It really feels like the age of the news cyborg has arrived. Our goal is apply this new capability to producing the clearest and most useful tech news overview available

As mentioned earlier, news aggregation is not just about clustering similar stories. There are really three steps: story selection, clustering like documents, and selecting best item from each cluster. This is certainly a set of hard problems. Which stories might be of interest depends on the audience and other contexts. Clustering similar documents is probably the easiest subtask and that is fraught with problems, e.g. that a bag-of-words model does not distinguish millions of dollars versus millions of square feet. (Thus, a n-gram model might be another possible approach.) There is a sea of potential news sources, they have different foci, reputations come and go, quality changes, news organization editors vary and change too. As Gabe mentions, there is a temporal aspect too where there is a window of interest before the news get stale.

There is no reason that an algorithm or suite of algorithms could not do this well. There are certainly a lot of social cues now that an algorithm could use to identify trending, interesting stories: the number of likes, shares or retweets; the reputation of those sharing the news; the number or rate of comments on those stories etc. To understand the audience and refine itself, an algorithm could use direct user feedback and again shares / like / retweets of those top stories. However, it remains a hard problem. With the big news sources covering core issues, smaller news operations have to work a different angle and sometimes those are the most interesting. Journalists are not consistent: they might write a blazing article one day and a mediocre the next. Thus, for now the algorithmic base + human editors or a pure crowd-sourced filtering (such as reddit) do seem to produce the best quality results.